My paternal grandfather, Gilbert McClung GILLESPIE, was born on March 20, 1914 in Lexington, Virginia.1  He was the seventh of eight children born to Wyatt Paul GILLESPIE and Laura Cecile DONALD. 2 His father was born at the end of the Civil War in 1865 3; his mother was the daughter of veteran of the Stonewall Brigade.4 Lexington, his hometown, was the burial place of Thomas “Stonewall” Jackson and Robert E Lee.   He is buried in the Stonewall Jackson Memorial Cemetery in Lexington, Virginia.

Over his lifetime he lived through WWI and II, the Korean War, and Vietnam. Prohibition and the Great Depression. The Civil Rights movement and 9/11.  He raised 4 children and lived to see all 8 of his grandchildren. He had 12 great grandchildren, but he died in 2003 before most of them were born.

Gilbert was born on March 20, 1914 in Lexington, Virginia.  His father, Wyatt was almost 49 years old and his mother, Laura was 37.  He had six older brothers and sisters when he was born, the oldest, Minnie was 17 years old.5

In 1914, Woodrow Wilson was president and WWI was on the horizon.   The family had purchased a lot at 108 Houston Street in 1907 and I imagine by the time Gilbert was born, they were living in the house that Wyatt had built. The address of the house was listed as either 22 and 108 Houston Street.6

The eighth and final child had arrived in the Gillespie household in 1918; Helen Mae was born on November 1st, 1918. By 1920, WWI was over.  On January 17th of that year, prohibition had begun.   Women were granted the right to vote in 1920 by the Federal Government, but Virginia did not ratify the law until 1952; women had been voting  and holding elected office in Virginia since 1920.7

Harriet die in October of 1920.   She was buried in the Stonewall Jackson Memorial Cemetery; her grave can be found in the same area as her brother Wyatt.

The area where Harriet, Wyatt, Laura, Eva, Minnie and other Gillespies are buried in the Stonewall Jackson Memorial Cemetery in Lexington, Virginia. The monument on the left is the grave of Thomas “Stonewall” Jackson.

In 1923, Warren G Harding, died of a heart attack in San Francisco, California. Calvin Coolidge assumed the presidency until 1929, when Herbert Hoover became president. In October of 1929, the US Stock Market had crashed. By March of 1930, 3.2 million people were unemployed.9

In 1930, They owned the farm they were living on, and Wyatt worked as both a Carpenter building houses and as a farmer on presumably his own farm.  Wyatt also employed two other people.  Minnie was a Saleslady in a Dry Goods Store and Ashby was an Electrician in a Power Plant.  They lived in a neighborhood where most people earned their living working for local merchants.10

Gilbert was known to say that jobs were hard to find, you should hang on to them. And I imagine that the family was glad to have 3 family members employed in 1930. 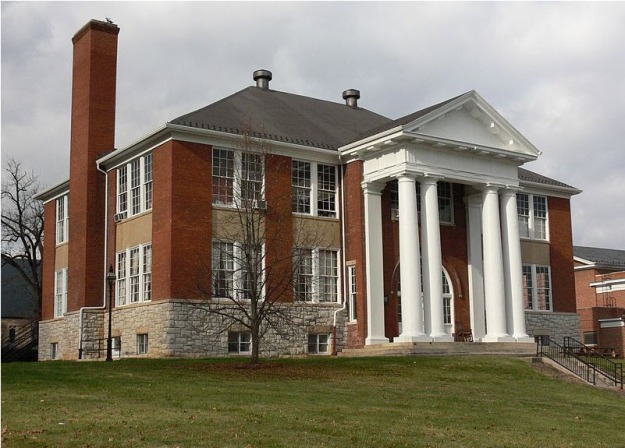 According to my father, Gilbert married Ann Irene Feazell on June 14, 1935 in Lexington, Virginia.  Gilbert was 21, his wife was 18. The earliest home I know of them living is was at 523 Taylor Street in Lexington.12

Both Gilbert Senior and Gilbert Junior both had the middle name McClung.  According to my father, it was tradition or normal for people to be given the last name of the Doctor who delivered them as a middle name.  The story was the elder Dr. McClung delivered my grandfather and the younger Dr. McClung who was the son delivered my father.  There was a Hunter McClung who was a practicing physician at the age of 60 in 1940. 15 He was also a practicing physician in 1910 in Lexington as well.14  I wonder if the same man delivered both my grandfather and father.   I have never found the name McClung in our family tree and I suspect that there is a bit of truth in this story.

Wyatt died on February 14th, 1941; my grandfather was almost 27.15 The Japanese bombed Pearl Harbor December 7th, 1941. It would seem that it wasn’t a great year for my grandfather.

They had a 4 year old daughter and a 1 year old son.  What were the thoughts that ran through their heads on that morning when they heard the news?  What was it like to live through those days when the outcome was not known?  What did they think when they picked up the paper or listened to the radio?

Gilbert and Judy sitting on the porch, possibly their rented home on 532 Taylor Street in Lexington, Virginia. The year is 1942, and looks to be summer.

My dad who was almost 5 by the end of the war had memories of black outs.  And his first memory was standing at a meat counter listening to his Dad talk to the butcher and saying that they shouldn’t change horses in midstream, talking about reelecting FDR.

He died on November 21, 2003 at the age of 89 in Huddleston, Bedford, Virginia.  His youngest son, Paul, was with him when he died.  He was buried next to his wife, Ann Irene FEAZELL who had died twenty years earlier. 16

This site uses Akismet to reduce spam. Learn how your comment data is processed.